In the context of fish welfare, manufacturers focus on the development
of fish friendly pumps and turbines. In recent years fish survival, damage
and delayed mortality were tested for several types of pumps and
hydropower station turbines.From these results, fish mortality can be up
to 100%. Different types of pumps were tested with as outcome divergent
results. Lack of migration (eels), presence of fish or insufficient species
composition with a narrow range in length class disturbed earlier
research and insufficient and unreliable conclusions were drawn. 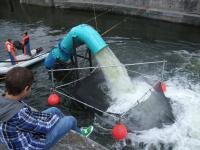 Protocol
Therefore a protocol is developed
by VisAdvies to test and evaluate
fish (friendly) pumps and turbines
with a standardized method. This
guideline gives direction to research
fish survivability of a new pump.
In addition, this is a guideline to
test pumps with one standardized
method to evaluate differences 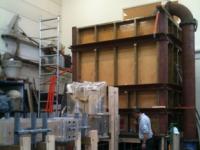 between pumps and turbines in
fish survivability.

Forced exposure
The standardized method named
“forced exposure” is developed to test
fish survivability in a controlled environ
-ment. Experimental animals will be
used in this guideline belong to
three families of fish that are common 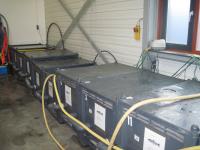 Contact one of our employees for more information about the protocol.

Test on fish survivability of the "Venturi Enhanced Turbine Technology".
The VETTVerderg Renewable Energy Ltd. developed a device that allows the use of hydro power at low heads. The socalled  “VETT” (Venturi-...

In opdracht van: VerdErg
Test on fish survivability of Bedford (model 80.05.12)
For the past few decades the welfare of fish in their natural habitat has become a serious issue. For this reason, fish must be able to...